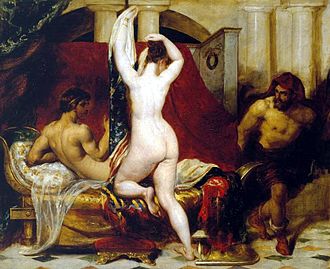 Candaules, also known as Myrsilus, was the twenty-fifth King of Lydia, the twenty-second and last of the Heraclides dynasty. Mirso's successor, he reigned between 733 and 716 BC

According to Herodotus, Candaules bragged of his wife's incredible beauty to Gyges, his favourite bodyguard. He said: ''Gyges, it seems you do not believe me when I speak of the beauty of my wife: for men, in fact, the ears are more treacherous than the eyes; so I will arrange for you to see her naked.'' Gyges refused, not wanting to disgrace the queen by seeing her naked; but he also feared what the king might do to him if he did not. Since Candaules insisted, Gyges had no choice but to obey; Candaule laid out a detailed plan in which Gyges would have to hide behind a door in the royal bedroom to see the queen undress before going to sleep. Gyges would then move away from the room when the queen turned her back to him. That night, the plan was implemented.